Arreu suffered an avalanche which destroyed it in 1803, then it was abandoned by its inhabitants on different occasions but it is still standing. Photo: Eloi Renau/@escapadarural

In a remote part of the Catalan Pyrenees hides a place called Àrreu, a town with hundreds of years of history that refuses to die even though its livelihood now depends on its only inhabitant, Eloi Renau.

The stories of Àrreu and Eloi are very similar, combining resilience, tenacity and a love of traditional ways of life. The 40-year-old from Barcelona is on his second attempt to rebuild and bring life back to Àrreu, a town that seems to refuse to perish.

One of the historic tragedies the city has gone through, It happened on the night of December 25, 1803, when a large avalanche buried almost the entire city. Ten houses in this isolated town of Los Pajares de Suso in the province of Lleida (Catalonia) were buried under snow.

This avalanche claimed the lives of 17 townspeople who, like many, caught the avalanche by surprise while they slept. It was a hard blow, especially since at that time the population of Àrreu was barely 88 people.

But the resilient natives of Àrreu decided to rebuild the town some 200 meters down the mountain where it was originally founded, a wise decision because during the following century, in the 30s, 50s and 70s, other avalanches were repeated, fortunately less deadly. 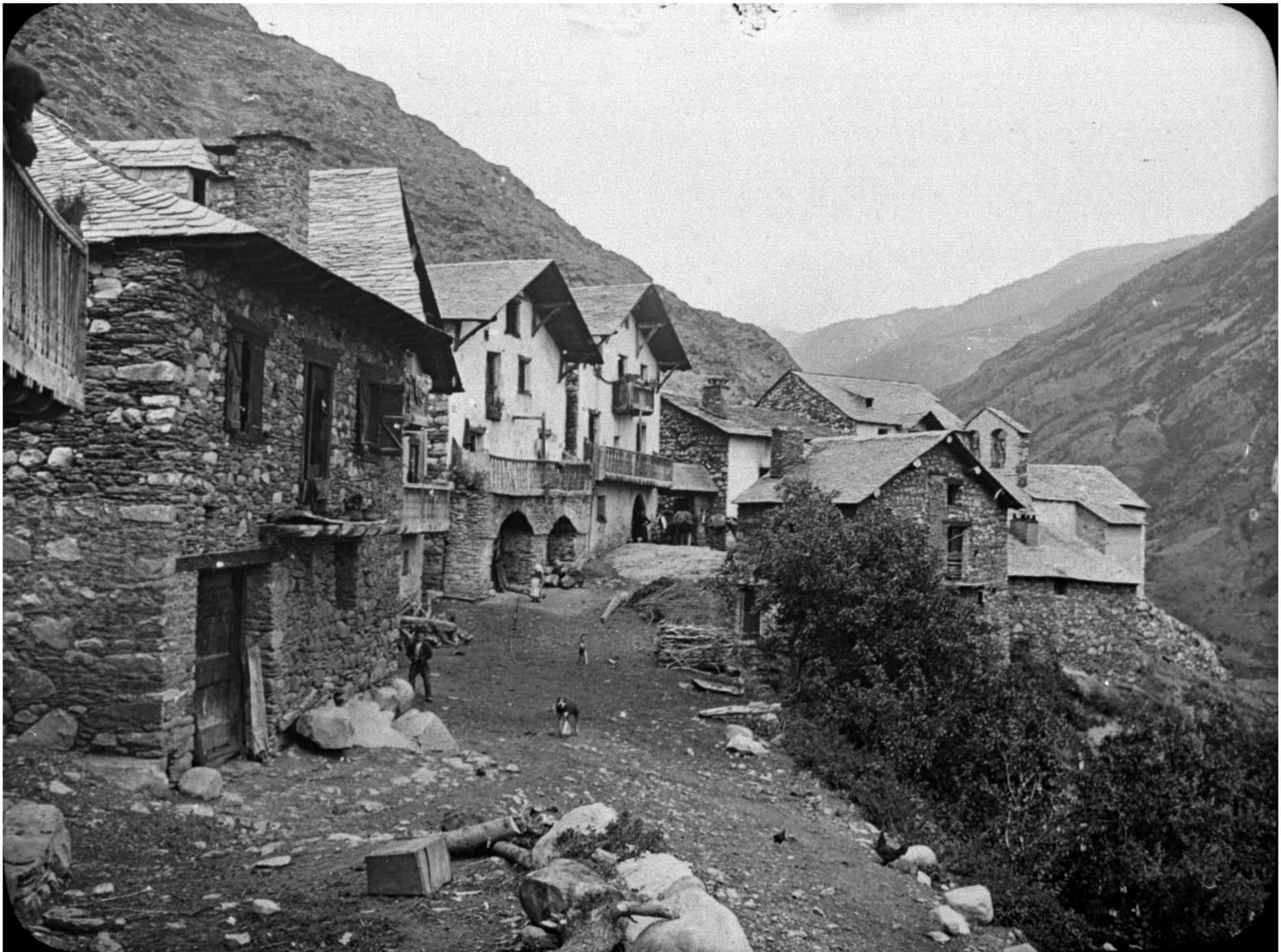 This is what the town of Àrreu looked like at the beginning of the 20th century.

Some 150 years after the tragedy, in the post-war years, the city once again flourished and found itself full of life.

A road to oblivion

The boom years of the town are between 1946 and 1970, its golden age. Then Àrreu had a population of about 30 families, with children, young people and adults. The main economic activity was agriculture and livestock, and they had a church “Mare de Déu del Neus” (Madonna of the Snows) which was the center of social activity in the town.

During these years, the production and sale of milk became the economic engine of the city. Every day, the herders went down to a crossroads where a truck picked up the milk. A one-hour trip, between descent and ascent, which they did religiously every day, whether it was raining, snowing or hot in the summer sun.

Until today, this road is one of the few access routes to Àrreu, a place that has gradually become isolated and forgotten because “progress” has never arrived there.

“The problem is that there was no access by road, the inhabitants had to go up and down on foot”, says Ferran Rella, one of the ex-inhabitants of Àrreu in a documentary made on the history of the town. 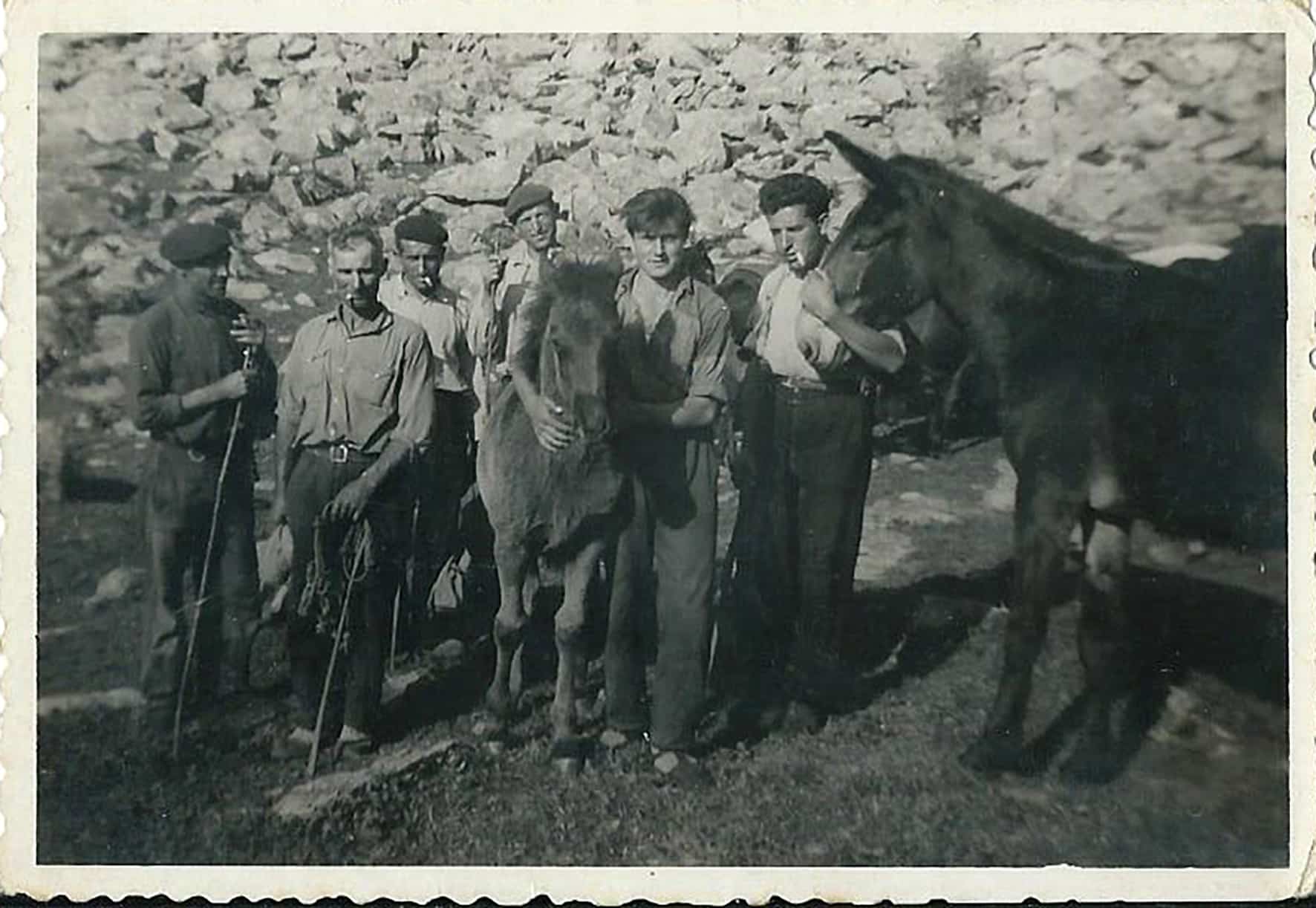 The young people of Àrreu in the middle of the last century.

“They transported milk, as well as other goods, on donkeys and mares. They put baskets on their sides to carry their weight and they had to walk beside them. There were also no schools or doctors., to add.

“The mountain people have been suffering for a long time but without access it was difficult to live there and, little by little, people left”, Fernando sentence.

To overcome this difficulty in the town, it was proposed to build a road that would facilitate access and communications with neighboring localities, but while in the rest of the Pyrenees region it was a reality, in Àrreu it was the center of contention.

Several of the neighbours, say the testimonies, ended up fighting for the road, because to build it they had to go through the place where some houses were built.

According to the documentary, one of the families burned down their house during the night, to force them to leave, causing the situation to escalate and eventually become unsustainable. 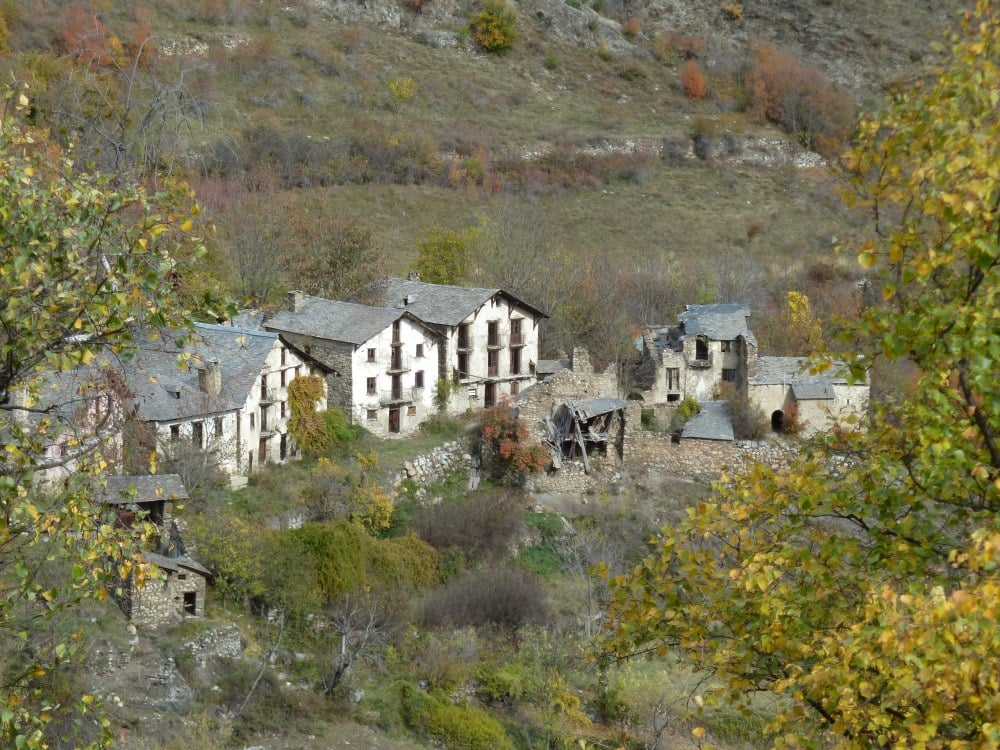 An aerial image of Àrreu

“I was aware of the conflict. In the end we pulled the thread and the story became more and more interesting”, Aleix Gallardet, director of the documentary, said Escapada Rural, in an interview last year.

“And it’s terrible, because in the end no one wins”he pointed out.

In 1980, the last inhabitant of Àrreu left the town, leaving the place desolate and at the mercy of looters who entered many houses and tried to take the Baroque relics from its church.

In the mid-1990s, the history of Àrreu attracted a small group of “neorrulares”, people who seek to lead a sustainable life, isolated and close to nature.

They were three, between 20 and 25 years old, Among them was Eloi Renau, a Barcelona carpenter and craftsman who first heard the city’s history from his father, who bought a house there more than 30 years ago. 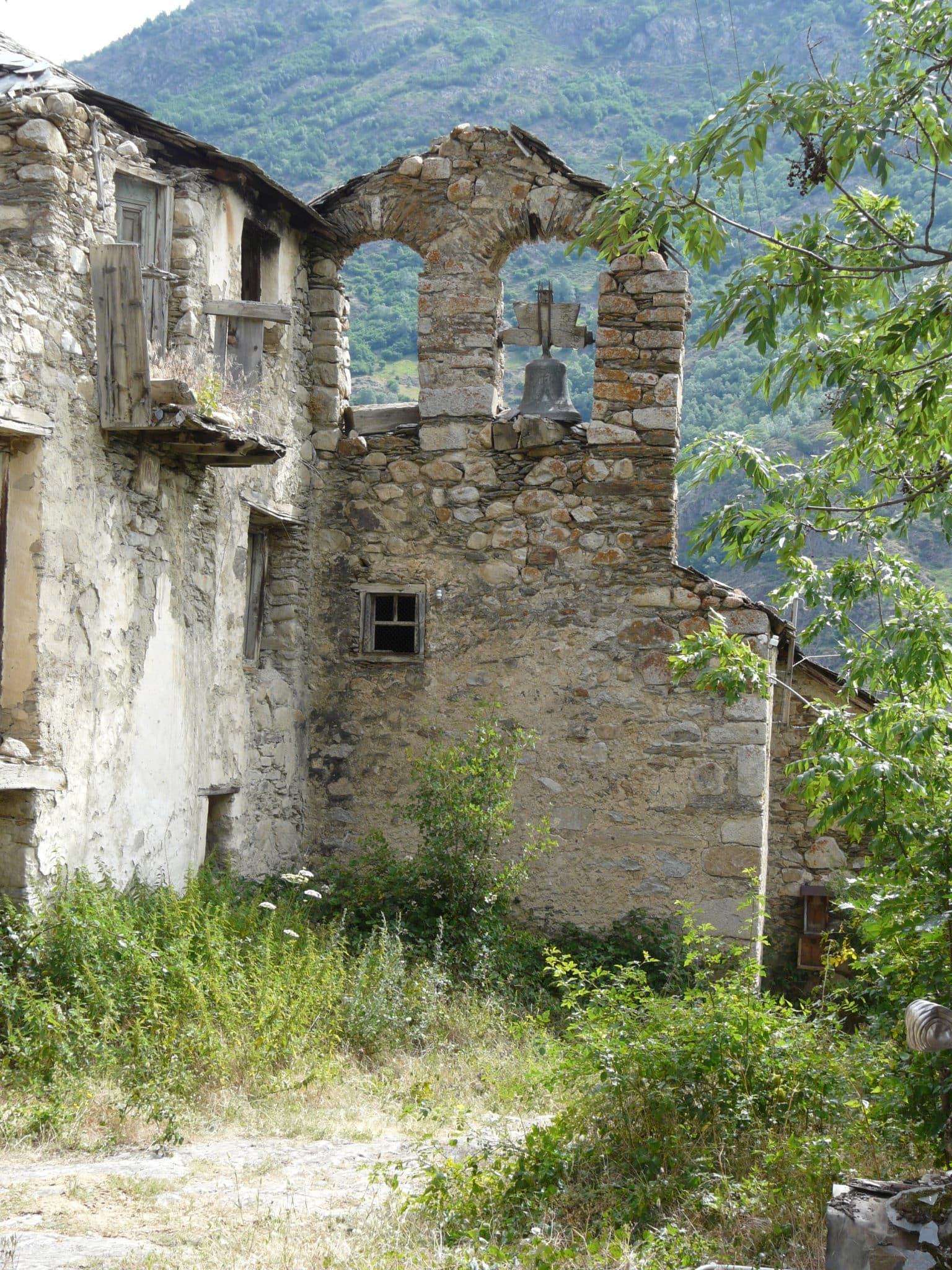 The remains of the old church of Àrreu,

His first project in the municipality was to build a track that would allow him to go up to Àrreu by car, partly solving his problem of inaccessibility. But although the project has been supported by the Provincial Council and the Generalitat of Catalonia, to date it is not completely finished.

“At the time, it was much more complicated. There wasn’t even a trail to go up in an SUV. We had to carry everything uphill. Food, pet food, butane canisters, it was really tough. At the time, we were really isolated from the world.”says Eloi in an interview with El Español. Eloi Renau, the only resident of Àrreu, has taken on the task of bringing this century-old village in the Catalan Pyrenees back to life. Photo: The Spaniards/Marc Solanes

This first experience of “neo-ruralism” had a turning point in 1998 when Devon, the last of these new settlers, decided to leave Àrreu because of the expansion plans that a Spanish hotel chain had in the area and which were supported by the majority of the townspeople.

Without the support that the old inhabitants had given to the new settlers, Àrreu found himself alone again.

But less than two years ago, At the end of 2019, Eloi decides to return and relaunch a process of repopulation of the city. He did this by investing his savings in a house and several pieces of land, and from March 2020 the final move began.

His transfer coincided with the first Covid-19 lockdown, which delayed his already complicated progress.

“I needed a radical life change, to be able to fully implement everything I believe in. Here I have everything: forests, mountains, animals and weather. What can I ask for from more ?confides Eloi, who does not give up in his attempt to preserve his lifestyle.

Àrreu’s hopes are pinned on her today, after hundreds of years of refusing to die. The place, though desolate except for Eloi, It has become a tourist site for nature lovers, adventurers who venture into the region and are not afraid to climb the 1,251 meters above sea level on which it stands.

Upstairs, they find Eloi, his fruit and vegetable gardens, his chicken and duck enclosure, his two imposing mares and his two mountain dogs. “Here, they are the most important. They are the real protagonists of this story. Without them, it would be impossible to return to traditional forms of work,” told El Español about his animals.

Eloi’s goal is to make a living from the objects, utensils and crafts he makes with wood. Complete the construction of his house, expand his workshop and set up an exchange shop in front of his house so that anyone passing by can freely buy his creations by depositing the money he considers in a small container without him needing to be present.

“A small gesture of exchange of mutual trust”, he claimed.

It seems that in the near future Àrreu will have a new opportunity to receive new inhabitants, and Eloi to have neighbors. Next summer, a young couple will move into the house next to him, and with the new face of the city, the former owners of the neighboring houses are spending more and more time there. 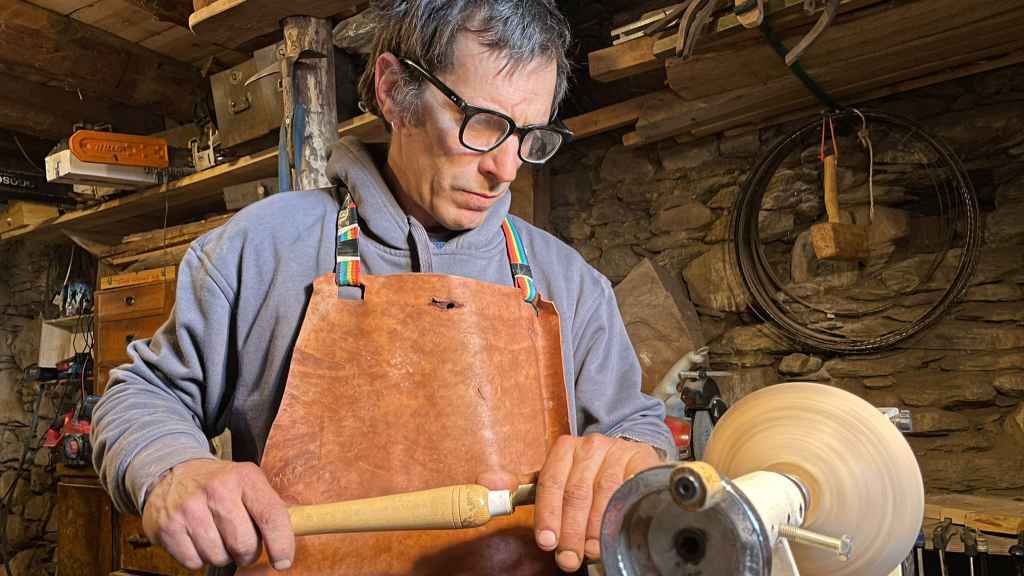 Eloi is a carpenter and craftsman who practices the neo-rural way of life. Photo: The Spaniards/Marc Solanes

Paradoxically, the hopes of a rebirth of Àrreu rest again on a highway, the construction of which has been paralyzed by the pandemic, but on which Eloi is working, with various owners of the city and other nearby agglomerations, so that it is finally finished.

Mehran Karimi Nasser, the mysterious Iranian who lived in an airport for 18 years and inspired Hollywood
Sudan’s Spiderman, the masked activist who became a symbol of resistance against military rule
The Incredible Story of the Doctor Who Secretly Inseminated Over 90 Women, Left 100 Biological Children, and Came to Netflix